At threethousand.co.uk we remain as keen as ever to get involved with as many projects promoting equality within the bass scene and beyond as possible. Following on from our recent ‘Womxn In Bass’ series, which was spear-headed by the amazing Ellie Sabine-Singh, we are back again, this time look at a project with a similar name, however working in a completely different area of the scene.

So let’s get into it as Scheherazade Initiatives present a top notch event, showcasing female DJ’s and artists from across the board. The line up works across different areas of creativity, with Lina kicking off proceedings with Lina and friends, who unveil an hour of poetry and theatre to discuss their new lives living in the UK, honing in on real life issues with characters and scenarios based on real life situations. 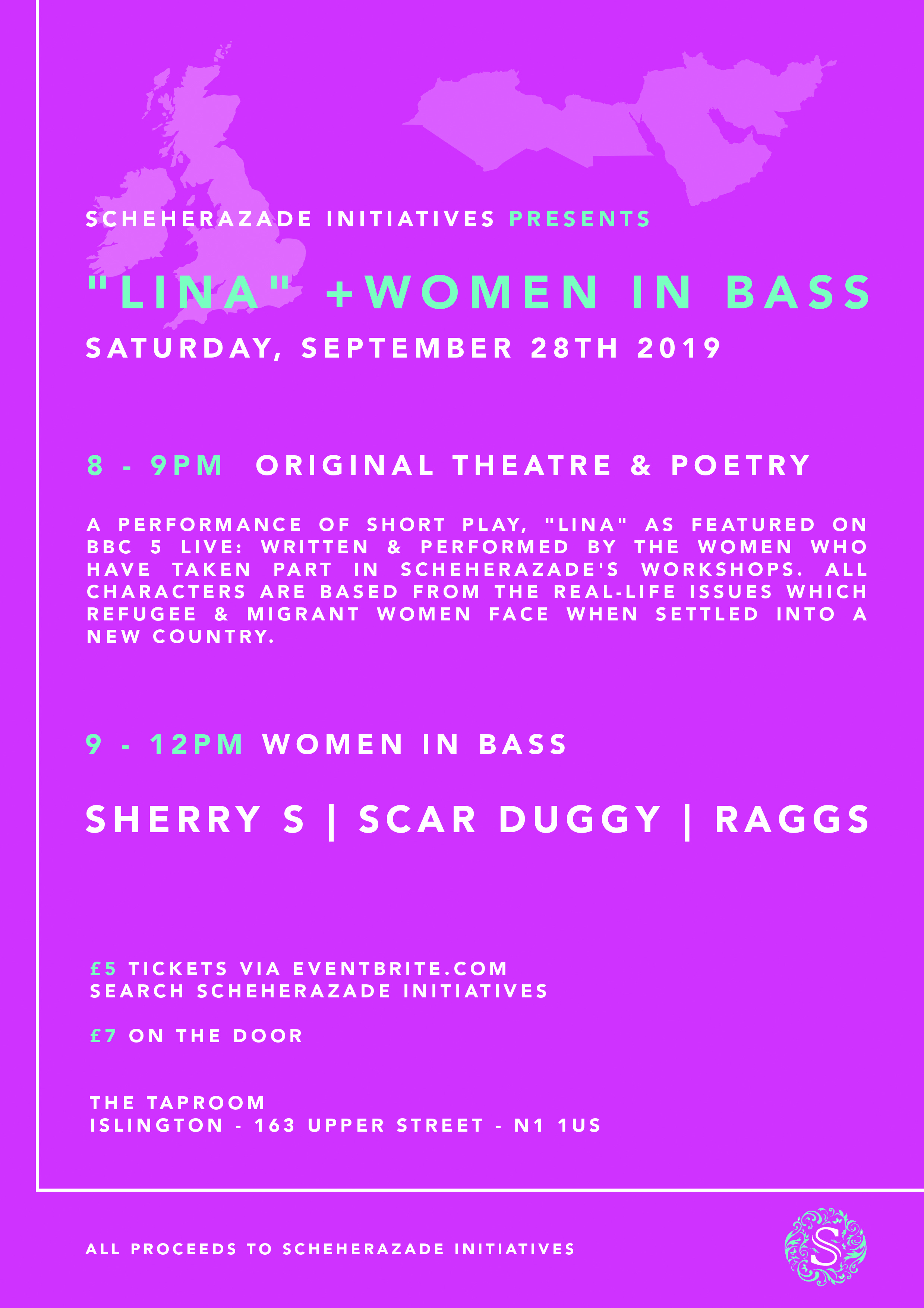 Following this, the event switches into a more classic DJ structure as the tables turn for a night of heavyweight bass selection. On the line up we see the return of Sherry S, who having recently claimed a Fabric residency alongside Fish is sure to have a stack of heaters to unleash. We also see Scar Duggy grace the line up, a London radio favourite, who has been making serious waves amidst UK funky and bass circles, primarily gaining a reputation for her incredibly diverse track selection, drawing influence from all corners of the globe.

As well as this, the legendary DJ Raggs also joins the line up, set to showcase her impeccable mixing skills with the realms of dubstep and UKG. She currently holds down a Glastonbury Block9 residency alongside having a large involvement with the notorious ‘Croydub’ events alongside SGT Pokes.

Scheherazade Initiatives is an award winning project that uses participatory theatre as a tool to empower migrant and refugee women and children from around the world.

We caught up with Sarah Zad, one of the women involved with the management of the event for a bit more insight into its importance.

How important are events like this in bass culture?

The origins of bass culture, and the resettlement process, are both embedded in positive ways to deal with oppression. Underground music, from folk, to bass, is rooted in expression as a response to struggle: a way to release tension and let loose. This is why I believe bass culture correlates with initiatives that aid the vulnerable: people, animals, those whose voices have been taken from them, are unable to express themselves, or are ostracised for doing so. Vulnerable people have been mistreated, often by sources of power, whether at a governmental or domestic level. Refugees escaping trauma from their home countries need resources and friendship when they resettle, and one of the best ways to help them do so is through language classes, because not speaking the language of your host country is a hindrance when attempting to integrate.

Learning a language can be done in a creative and fun way which makes the process less intimidating and more beneficial, which is what Scheherazade Initiative workshops do. Bass music is under the radar, and the people in the scene feel a genuine connection to the music, not necessarily because it’s “in style.” Whether or not bass music merges into the mainstream, its roots are firmly in the underground scenes. A sense of community can be found in bass culture, and also in helping vulnerable people to restart their lives. Communities change lives, and when people are welcomed instead of shunned, communities grow and thrive. Just like in bass culture, the more producers, the more nights, the more ears that enjoy the sounds, the more the community grows and thrives. Thus, culture clashes, like this one, make for the best events. The beauty is seeing the commonality in the different cultures and art forms.

How did you go about curating the line up?

Since this event is raising money for a women’s charity, I wanted to have a women-centric event. Sherry S, Scar Duggy, and Raggs are the trifecta of women in bass, and I was already a fan of their productions and DJing. We all got in touch through friends, and I was so humbled that they were up for playing and supporting the cause. I’m so excited to host them for this event combining theatre and music from exceptional women. Women supporting women and those who identify as women coming together is how the world will become a safer and better place.

Do you have any more events in the future?

I’d like to host another “Women in Bass” event for Scheherazade Initiatives in the new year. I’d also like to host another “Sing for Syria” event in the future, which is an appeal I started in 2013. This appeal involves bass music events to raise money and awareness for the ongoing Syrian crisis for the International Rescue Committee Syria Appeal. The Syrian crisis doesn’t make the headlines as often as it did a few years ago, but the struggles within and outside the country for the Syrian people are still ongoing. Many women that take part in the Scheherazade Initiatives workshops who will be performing “Lina” on the 28th are Syrian refugees.