In the sunny sides of Bristol, we have seen a complete musical explosion over the past few years, as new producers and projects seem to be popping up left right and centre to deliver quality bangers to fans of bass music worldwide. Given the cities incredibly rich musical history, it’s hardly a surprise that the legacy continues to reign supreme throughout a 2020 filled with emotion to say the least.

Today we are heading over to one of our favourite newer imprints as we join Sherry S & Fish, bass’s favourite couple, as they unveil the latest drop from the rapidly expanding Cocobolo Sound imprint, following on from a heaped stack of top notch originals. This latest outing, sees them draw together the vocal power of the ever-ready Juma and production prowess of the super consistent Fork & Knife for a certified slap. 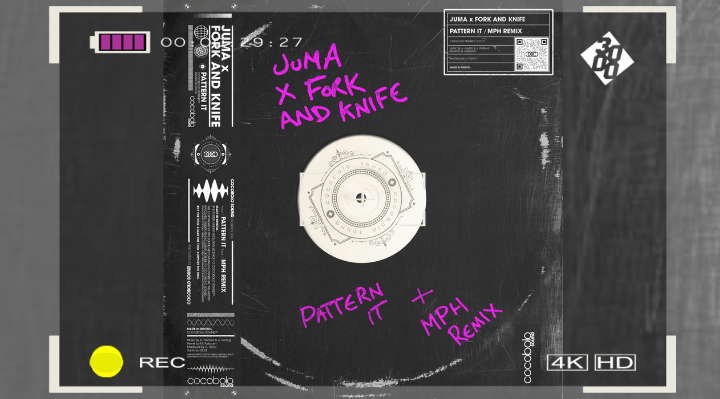 The original track ‘Pattern It’ is an instant roller. It’s a bubbler, dynamite for any DJ who is looking to inject an additional dash of energy into their selection mid-rave, with Juma’s extremely catchy vocal hooks bringing an extra layer of life to Fork & Knife’s incredible slick arrangement below. It doesn’t stop there however as the release also comes complete with a tasty remix helping from man of the minute: MPH.
Despite the garage-like feelings that can be found within the original, MPH takes the composition to a whole new 2-stepping level, with an array of typically vibrant chord structures and bass lines to match. The EP as a pairing most certainly works, which is why we felt the need to catch up with the partnership for a quick Q&A session which you can check out below.
–
How did you two start working together?

Juma: I’ve known Fish since the Rood FM days & Sherry S since moving to Bristol, started doing a few shows together and it always went off. We had plans before Covid fucked everything up to do more live shows and make some bangers for Cocobolo sound. Just before all the madness hit, Fish sent me a pack of dubs to check out and I couldn’t believe how perfect they were. Andrew is clearly a don on the buttons and I was now a fan, I immediately had ideas for one tune in particular so started writing. Shouts to Fish, Sherry, Fork and Knife and MPH for delivering this sick project.

F&K: Got put in touch through Cocobolo. I had the instrumental that I’d made specifically for a vocal but I’m not overly proactive when it comes to reaching out to people. So I sent it to them, they said Juma would be perfect, the rest is history. Turns out Juma was perfect.

How did the studio process work during lockdown?

Juma: Dashed all the clothes out of my cupboard, balanced a laptop on a shelf, plugged a mic into the soundcard, hung a duvet behind me and then duppied it.

F&K: The process was actually no different to how I normally work with a vocalist. Or any collab really. I’ve never been one to meet up with someone and physically go to a studio together. I guess down to time and other commitments I always just find it easier to just send files to eachother.

Is this a link up we can expect to hear more of?

Juma: This is just the beginning…

F&K: Funny you should mention that. I haven’t even popped the question yet but I am sitting on something that I plan on sending Juma’s way. Currently working on something with another MC and we both thought it’d be sick to get him on it. So Juma… If you’re reading this… I’ll have something for you very shortly.

How do you feel about the MPH remix?

Juma: I’ve been 2 stepping all over the gaff to the MPH remix on repeat LOUD at least 100 times and I’m still not sick of it. Smashed it.

F&K: Ah man. LOVE the remix! As soon as it starts you know where you are. It’s so bright and shiny. BBQ accompaniment material.

If you could put a genre on the original, what would you call it?

F&K: It’s definitely under the garage umbrella. I always start tunes thinking ‘right I’m gonna make a garage tune’ or whatever genre I pick and then as it evolves it takes on loads of elements of other stuff I like (to the point where it often becomes it’s own thing). So this has a lot of grime and dubstep sounds, has a load of percussion akin to funky and club stuff. The original and the remix I feel are good examples of how versatile garage can be as a genre. Both sitting at completely different ends of the spectrum.

How has it been working with Cocobolo on this one?

Juma: Nothing but vibes, everything has been smooth, easy and fun. The promo is on point and the artwork is insane, have you seen Fish’s lyric video? Nuff said.

F&K: Working with cocobolo is just easy. I know I’m in safe hands. The promo material is always so good. It’s easy to not care about the accompanying art with music but I think that’s because there’s so much bad stuff out there. Not the case with cocobolo and it makes such a difference. It’s always exciting receiving the pack to see what the release is gonna look like. Also, Fish and Sherry are basically celebs in the scene so you know the music is gonna be getting heard by the right people. I’m flattered anyone is listening to my music tbh

What’s on the way from both of you?

Juma: Watch this space… hopefully the clubs will be back soon and we can shell down some dances together.

F&K: Following on nicely from the last question… I’ve got loads of other stuff coming out with Cocobolo. Plus my other usual go to guys in:flux audio, 1forty and articulate. Just wrapped up a remix for in:flux too. I’ve produced something for a pretty big mcs album as well. I’m always hesitant to say too much just in case it never happens but yeah… lots of stuff in the pipeline

We have been given the fantastic opportunity to get involved with the premiere of MPH’s fabulous remix, which we have attached below:

You can check out the release in full below: