We have seen so many new imprints come and go over the past three years within the realms of bass music, it’s often quite difficult to keep track on who is doing what. It seems to an extent to be part of the general pattern these days for artists to gain some substantial traction and immidietly decide to set up their own label imprint. Often however, artists don’t realize how much has to go into an imprint to get it off the ground past the initial buzz of releases one, two and three.

A label that has most certainly understood what it takes to maintain consistently good releases is today’s feature as we get involved looking at 1Forty’s brand new three year celebration release, combining the best of their Grime, Bass and Funky & Garage genre drops. There really are few labels that have been able to keep pace with the consistency and originality of the 1Forty schedule, making them a real front runner in the scene three years on from their dramatic inception. 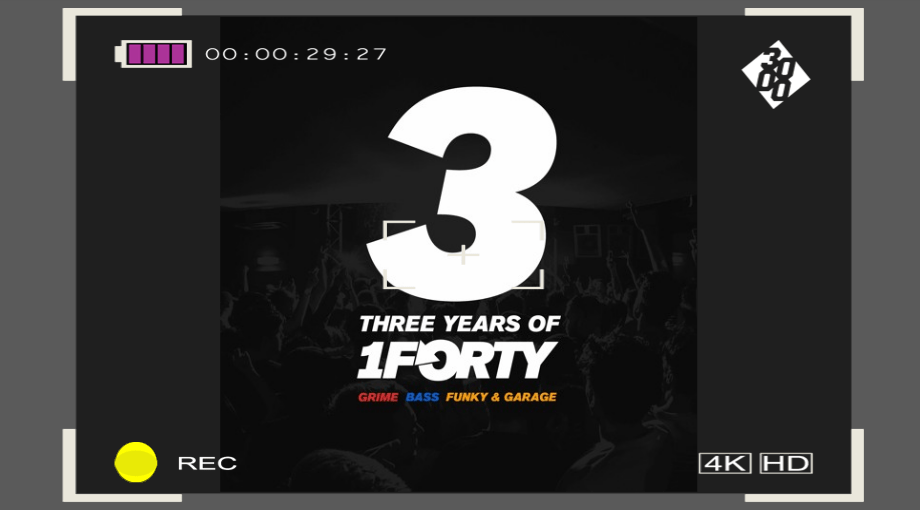 The three year release features a set of absolute corkers, with the vibrant VIP mix of Hayz’s ‘Hightop’ being the first track to land packed full of sizzling grimey synth work. From here, NLMT links up with FALLU for a rave-ready relick of ‘Time’, before the unstoppable combination of Murder He Wrote & Logan put a 2020 overhaul of ‘Worthwhile’ together. The release is exactly what we look for from 1Forty, which is why we had to take this one a tad further and get the featured artists involved with a multi-level Q&A session, which we have attached below.

How has it been working with 1Forty over the past 3 years?

Hayz: Working with 1Forty has been an absolute treat over the years. Having attended the majority of their events in the past and then being asked to join the team a few years ago, I feel a personal connection to the brand and it’s been amazing to see the brand go from strength to strength. I’d class Tom (LOCKT) as a close friend now and I feel like the levels of communication he provides is not something I’ve come across from many other labels. The artists releasing with the label are very much seen as one of the 1Forty family, I think this is illustrated by how many artists release multiple times with the label. 1Forty is very much a label built on great relationships. I’ve not only built relationships with the 1Forty team, but also with other artists through the label.

Murder He Wrote: It’s been good! Lockt puts so much work into 1Forty and the scene in general and I think that really shows from the level of support the releases get and the growth of label.

NLMT: I’ve really enjoyed working with 1Forty recently. Quietly, it was always a personal goal to secure a release on 1Forty. I’ve always appreciated the quality control that Tom incorporates into the label – you’re never ever going to hear a sub-standard release on 1Forty, so they’ve been on my radar for a good while now. Add into the fact that they’re a multi-genre label as well, so consequently their ‘UK Bass’ releases are few and far-between, and it just makes that entry bar for my go-to style that little bit higher.

So when Tom reached out with the intent of releasing ‘Time’ on 1Forty – even though when he first touched base, the track had a vocal sample which would never have got clearance – it was humbling. He went out of his way to try to find a talented singer to work with, and he put me in touch with FALLU. She absolutely smashed the hook line out of the park, and her vocals were a dream to work with. I’m looking forward to hopefully working with FALLU and 1Forty again in future

How important are multi-genre labels to today’s scene?

Hayz: Although I mainly stick to 140bpm in my production, I see myself as a multi-genre DJ and I like to play whatever music I like no matter the genre. Because of this, multi-genre labels are essential – they shine light on talent from multiple scenes and enable me to discover the music that I love. Running a multi-genre label may have its limitations, but 1Forty have established a fan-base in the Grime, Garage, Funky and Bass scenes. This is no mean feat. You’ll attend a 1Forty event and meet people who are there to see a specific grime artist or a specific bass artist all under one roof. For me, this is what music is all about and it wouldn’t be possible without multi-genre labels like 1Forty.

Murder He Wrote: I like a curated multi-genre approach to club nights and that holds true for labels too. It’s just a real nice, organic way to get exposed to different sounds maybe you’re not checking for as much and a great way of bridging the gaps between different scenes and their fans and artists – ultimately can only lead to a stronger more unified underground, something we’re definitely going to need with the impending clubland crisis as we come out of lockdown.

NLMT: To me they’re vitally important, for a number of reasons. As aforementioned, I find the quality control on multi-genre labels to be that little bit higher, because the focus has to be on quality over quantity, given the fact that each genre they cover can only be released sporadically, to avoid pigeon-holing. As a producer as well, I find it’s good to work on different styles as well – personally I’ve been working on bassline, speed garage, house, drill and drum and bass projects over the last few months – and finding a strong multi-genre label can give you a consistent home for your music, so your audience never has to go looking too far.


Another important aspect of multi-genre labels as well, is their ability to introduce their audience to new styles and genres of music that they may like, that they may not have realised is their ‘thing’ before. I’m a strong believer in a label having a sonic signature or blueprint, so you can tell when a track is released on their label. If you look at the big EDM type labels – Spinnin’, All Around The World (back when they ran the game) or Defected Records – they all release a range of music across a vast spectrum of EDM genres, but I feel like you can pick out their releases upon your first listen, if that makes sense.
All it takes is for a listener to find one track they like, which has been released by their favourite artist on a multi-genre label, and they can be led down a path of different styles and genres of music, but with the same sonic blueprint, and their eyes are opened to a whole new genre that they didn’t even realise they enjoyed before.”

If you could pick one other artist who has released on 1Forty to collaborate with, who would it be?

Hayz: A year ago, I would’ve definitely said 9Trane, but I luckily got to work with him towards the end of 2019 and we released our track “Square Route”. I’d say now it would be Fork and Knife. His style is truly unique to me, I love his percussion and sound design and I feel like our styles would complement each other well. I have a good relationship with him, so hopefully this collab may happen in the future.

Murder He Wrote: Ahhh this is tough! There’s plenty of people I’d love to work with on 1Forty but if I’ve got to pick only one I think for me it’s got to be the king of wonky synth noises™, Killjoy. We actually started on something when we were both out in Australia earlier this year so watch this space…

NLMT: Now that’s a tough question. I think I’d enjoy collaborating with a lot of the artists on 1Forty, as pretty much every artist that’s released on there is technically proficient, and knows how to make a banger. If you’re twisting my arm though and I have to pick one, especially one that I’ve never worked with before, I’d have to say Sammy Virji. That man knows how to make a tune to rip up a dancefloor… his remix of ‘Feeling Awake’ by AC Slater was incredible, one of the tracks of the year for me.

I’m a big fan of the way Sammy prioritises vibes over everything, and he’s covered the up-front bassline stuff, but also makes vibey garage and skatty drum and bass as well, but his style means you can easily listen to all his stuff at home, and the same tune will set a rave off differently. Being greedy, I’d also love to work with Zero one day as well – I feel me and him have a similar approach to melodic design, and would both bring different angles to the table.