We get tropical with Hamdi’s brand new 4 tracker

If you’ve been following us for a while, you’ll know Hamdi is a mainstay in the world of UK Bass. His surreal approach to everything from dubstep to UKG and his various collaborations have made him one to watch over recent years. Last week, Hamdi returned with a brand new project inspired by the wonderful sound of the Cuban sun, aptly titled Cuba. This 4-track banger is the second of his South-American themed releases, shortly preceded by the wonderful Brazil EP. Both far cries from his previous releases, Hamdi once again shows just how diverse his production style can be. 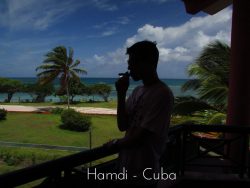 If you’re missing the sun in dreary England, you can find your ‘Sunshine’ with the next track on this EP. This track changes the pace of Cuba entirely, fusing a jungle rhythm not unlike that of Shy FX with simple melodies which beg for a cold drink on a beach. While this may not be the Brighton producer’s usual forte, it is undeniably a style that he has moulded into his own. Broken vocal chops and breakbeats make this breakbeat-powered tune one to watch.

Going back to his roots, Shaking is Hamdi’s call to all 140 lovers with this love letter to classic UK grime. Arguably the most unexpected of the group, the unnervingly dark synths rip through tradition in a brand new fashion, spinning in hints of dusky dubstep not unlike that of Hessle Audio’s releases. A track that’s full of confidence in the purest form.

Viñales closes the EP, going full circle with some mesmerising percussion and looping melody lines. Keeping things crisp with a head-spinning adaptation of Latin music’s conventional patterns, Hamdi merges playful themes with piercing drum work and creates a vibe unlike any other. Arguably the standout of the release, Viñales pays homage to music across the globe through this uncurbed journey.

It’s no surprise Hamdi has smashed it once again with this release. Experimental, colourful and raw, this is an EP which firmly settles the producer as one of the most versatile names on the scene right now. The man who could give many heavyweights a run for their money will sweep you off your feet with Cuba.

Listen to ‘Hamdi – Cuba’ below:

For more from Hamdi, please go to: