Vindication of the Vocalist: A Cautionary Tale

The relationship between vocalist and instrumentalist is rarely talked about outside the realms of “rap”. You’ll notice the use of quotation marks as I refer to the action rather than the genre – an action prevalent across many forms of music in 2019 – ranging from House, to Jazz, to Country music. 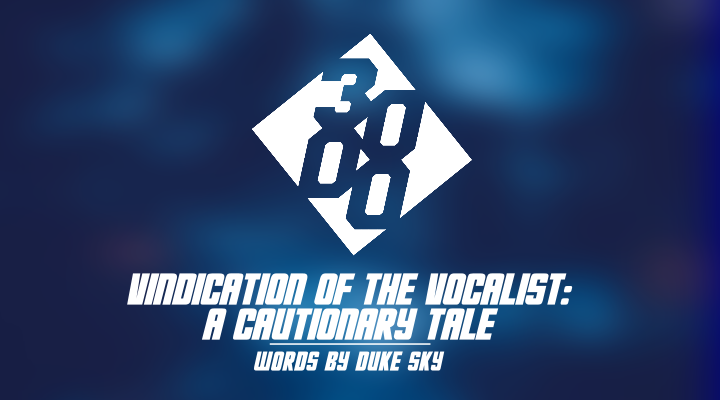 I’m fortunate enough to have been exposed to a vast majority of variations, and whether my experiences have been empirical or observed, there has always been an interesting takeaway. My intrigue is not fuelled by the vocalists themselves but rather the reactionary audience. Take the genre of House, for instance: far from a genre you would immediately associate with rap. However, South London trio The Manor have built their careers off just that; taking the same kind of House beats that fans know and love and adding an extra bit of sauce to it. This combination worked perfectly as Danny Graft & The Manor burst onto the scene in early 2011 via Graft’s SBTV Warm Up Session (swiftly evolving into a hugely popular studio version: the Alors en Graft freestyle), and nearly 10 years on the boys are continuing to reach new heights with that same style. They’ve stripped it back, refined their sound, and are now mainstays in the UK’s music scene. Recent tracks such as Ibiza and I’m On That have gone down a treat, only serving as evidence of this House/Rap amalgamation. A fusion of witty lyrics and disco flavours come together to great effect, and from fans there have been little to no claims of a disturbance in the sanctity of the House genre.

Now let’s speed it up a bit. Quite a lot, in fact. Drum & Bass is one of the few genres that is quintessentially British – a cultural phenomenon amassing an almost cult-like fanbase. You would think that an audience so protective over it’s music would be adverse to the idea of someone rapping all over it, yet this couldn’t be further from the truth. Skibadee, Harry Shotta, and the late great Stormin are just three examples of rap thriving within a scene. It’s arguable that their role is just as highly regarded as that of the producers and DJ’s. Much like Garage (another traditionally British genre) a rapping vocalist is typically seen more as an MC (Master of Ceremony/Mic Controller) than a “rapper”. What’s the difference, though? In all honesty it depends who you ask. In my personal opinion, an MC is someone whose primary job is to keep a live crowd engaged, paying close attention to complement the DJ they‘re alongside. A rapper, on the other hand, takes centre stage. Their focus is curating songs and projects and so the live performances are more structured, it’s more a showcase than live set. For me, the importance lies in knowing your role, understanding the balance; whether you should serve as an accompaniment or take control as the main act. Acclimatise to this and you will endear yourself to any given audience.

We’re going to take a quick trip across the Atlantic to discuss these next two. Firstly, for those who haven’t heard it, FKJ & Masego’s Tadow is an absolute must-listen. The live Jazz instrumentation takes you one way, then the rapped lyrics sway you another. It’s a deluge of creativity. Take the vocals away and you’d have an archetypal Jazz track not usually associated with rap at all, but Masego treads carefully, combining palatable subject matter with his seemingly effortless flow, resulting in one of the most appealing songs of the past few years. Now, then. The youngboy who got all the old heads riled up. Rarely has there been such commotion surrounding the blending of two genres, and whilst I do believe the Streisand Effect played its part, I couldn’t say that the song didn’t warrant the attention it received. In my opinion, it’s creative genius – you may not appreciate it but you’d better respect it. Lil Nas X was denied a place on the Country music charts after claims his song Old Town Road “isn’t Country enough”. Was it the 808s and Sub Bass that scared them, or was it the rapping? Maybe it‘s the distinct lack of a ‘yee haw’. Either way, the song is a perfect example of genre fusion; it divided audiences and ultimately birthed a true underdog story. I usually abide by the rule of 10 when it comes to creative judgement – 4 people will love it, 4 people will hate it & 2 people won’t give a f***. I’d have to say, though, that this should be considered a victory for Lil Nas X – the ratio ending up very much in his favour.

Back in the UK, a close cousin of UKG known as Bassline is fast becoming this generations version of Dubstep (not sonically, but rather the impact it’s having on wider audiences, particularly the student markets). However, whilst MC’s such as Crazy D were heralded during the Dubstep days, it’s a relationship that has become strained over the years when it comes to Bassline. Born out of Sheffield, the genre has spawned a few locals who have proven exceptions to the rule (the rule being ‘don’t touch my precious bassline’). This is far more prevalent in live sets than it is with actual songs, it has to be said, but it’s an interesting dynamic nonetheless. Guys such as K Dot, Bru-C and more recently Window Kid have demonstrated it can be done, and I would very much class them in the MC category if we’re using my aforementioned criteria. Bassline audiences are far more interested in hearing a vocalist on a song rather than live in a rave. Once you have a sustained reputation (à la Bru-C) then the crowd’s tend to place their faith in you. Until then, it’s probably best not to bother battling some of these screeches. .

I’ll close this out by taking a look at one of the few genres I can think of which accepts MCing and rapping in equal measure: Grime. Whether a DJ’s playing your vocal track, or a track for you to spit over there and then, Grime crowds have always been equally welcoming. Why is that? It could be because of the shared influences of the genre – Garage and Jungle, Dancehall and Hip-Hop – all coming together to create the best of both worlds. It could also be because Grime is more regimented from a tempo perspective, allowing a consistent level of familiarity. Or, it could simply be because the Grime audience is the least fussy. I’ll leave that for you to decide. It’s a genre which has also provided for artists the eclectic wherewithal to experiment in different styles, aptly demonstrated through Razor’s UKG piece, Found, and Logan’s recent Funky House banger, Bad.

As mentioned, my belief is it’s all about knowing your role. Play your position. If it’s a live performance, you should be able to read an audience/line-up/event to a great enough extent whereby you and the DJ complement each other. If it’s a recorded track, take time to make sure that everything is exactly how you want it before release. Music is always subjective, of course, but there’s no doubt that more leniency is offered in some genres rather than others, specifically when it comes to the incorporation of rap. If in doubt, refer to the man who has stamped his mark on the vast majority of contemporary styles. Ask yourself, ‘what would P Money do?’