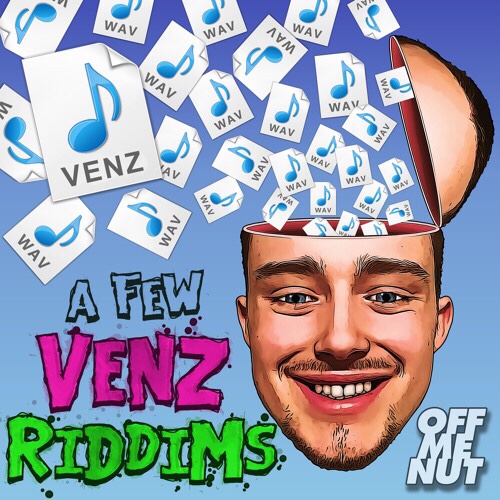 If you’ve had your ear to the ground regarding bassline releases no doubt you will have at least seen a meme relating to Venz’s new release ‘a Few Venz Riddims’. Bearing the hallmarks of his OffMeNut label-mates, incorporating time-worn, cheesy pop samples and warping basslines, this whimsical release exudes fun and creativity whilst somehow keeping its fingers in the proverbial old-school and new-school pies.

Right from the off you’re hit with ‘I Hate You So Much’ (sampling Kelis’ ‘Caught Out There’) which sets the tone nicely – school disco-esque wind-ups followed by punchy, skanking basslines with enough variation between motifs to keep you bouncing until the next track. ‘Flex’ continues on form, contrasting its driving, 4×4 beats with tightly-woven, syncopated leads and basslines. ‘Toxic 2’ could loosely be called a ‘Britney Spears remix’ but if you’re familiar with the sound coming out of the OffMeNut label you would know that is certainly no bad thing (Thorpey’s remix of Complicated amongst many, many others springs to mind).

‘Cosmic Prang’ sincerely made me laugh out loud; utilising a sample from my favourite Jamiroquai track set against spacey, breathy synths whilst setting up the drop with parallel chords reminiscent of The Prodigy, the segue into bassline seems almost absurd. This is the device the LP exploits most often and where I feel the tracks shine brightest – the juxtaposition between familiar, often distorted pop vocals and the pungent, snappy rhythm section.

‘Save Dat Money’ at first kicks with an old-school bassline flavour which transported me back to Supa Dupa 2010 before switching it up, after a lengthy vocal break of course, to that spooky Sheffield sound.

‘Rain’ stands out as the only collab on the record and was seemingly co-produced with ‘Miggy’, an artist I’m unashamedly most familiar with thanks to the first bootleg of ‘Toxic’, which more than likely inspired ‘Toxic 2’ on this record. The abrasive fine-tuning on this track makes it suitable only for peak times in the rave and it’s a challenge not to screw up your face when the first drop lands.

‘Venz Riddims’ the (almost) eponymous track on this LP is potentially the wonkiest track in the listing and the vocal sample declaring ‘I might drop a few Venz riddims’ proudly introduces this sideways offering. Interestingly this is the only tune without sampled pop vocals but their absence does not affect the impact of it. Furthermore I expect the aforementioned sample is one you’ll become very familiar with if you’re about for a bassline rave in Sheffield any time soon.

‘A Few Venz Riddims’ is a half-and-half blend of effervescent pop samples and, at times, massive drops which manage to mix old-school and new-school flavours artfully. If you’re a fan of bassline and especially if you enjoy the Sheffield sound go check out this LP – not one to be missed!