Within the now worldwide spectrum of bass music, we are always looking for new artists and new producers to be pushing the boundaries of sound, trying to carve out their own niche signatures and thus advancing the scene.

Unfortunately, for a lot of producers this isn’t a scenario that occurs, hence the now almost overrun scene, packed beyond breaking point of producers who are all just imitating each other with very little variation of creativity. One new act that we have found to be really pushing the boundaries is a groundbreaking duo that go by the name of HEYRO.

This partnership, originally hailing from Sydney, have been causing quite a stir with their seriously unique take on bass music, after spending almost two years underground with the project, cooking up a storm that nobody was expecting to emerge. As producers and performers, HEYRO have a host of experience as live performers, focussing their skillset onto live instrumentation, which as a USP is something that is always interesting for a ticket holder to perceive. 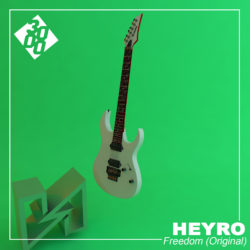 This live instrumental experience has had a major impact on the duo’s musical arrangements, with live guitars playing a serious role across the breadth of their compositions, creating some really interesting frequency contrasts. Their release catalogue is also already looking impressive, as they have stacked up notable releases alongside the likes of Central Station and Borderline Records.

We are here to take a quick look at their brand new single, which takes up the title of ‘Freedom’ and is now available for free download via the 3000 Bass SoundCloud page. This track really exemplifies the sound these guys are trying to push, with a combination of new-School breakbeat drums themes, dubstep inspired synth twists and some super catchy live performance across both vocals and synthesizers.

We begin with some rapid fire breaksy percussive rolls, developing alongside monstrous synth growls and adding a build up of energy which is released as sail over an epic clifftop of a breakdown. We rapidly descend into pulsating synth punches, scattered drum expanses and rowdy rhythms. This is a perfect showcase of everything these boys are about, and we couldn’t be happier to be featuring them here on threethousand.

And you can stream/download the track for free via 3000 Bass below: