When you think about Vancouver a few things might come to mind: its immense natural beauty, the towering skyscrapers or its international community. What undergoes less consideration is the sprawling underground music culture that finds its home in the heart of the city, hosted in a variety of public to semi-hidden venues. Upon moving to Vancouver I was surprised to find that Bass music not only exists, but is undergoing something of surge in popularity. Through a few chance meetings and tentative SoundCloud messages I managed to strike up conversations with a few of the figures pushing the bass music culture here on the West Coast of Canada.
The first of said figures was ‘Myles Away’, a graphic designer, producer/DJ and label owner who agreed to meet me for an interview over sushi after work, the day before weed was legalized – when in Vancouver, right?
The interview can be found in full below:

Q: Ey up 3000 Blog, tonight we have the esteemed privilege of interviewing one ‘Myles Away’ who is a central figure in the Bass music scene here in Vancouver. Let’s start at the beginning Myles: what is it that first got you involved in the scene here?

A: I would say the thing that got me first involved in the scene was writing music with my friends 10 years ago, just for fun. I heard one of my tracks played out on a festival rig and I thought to myself: ‘that’s what I wanna do!’ It looked fun and I was planning on moving to Thailand to teach English – I totally threw that plan out of the window and just started writing music and DJ’ing and it kind of took off from there.

Q: It seems music has had a profound effect on your life thus far.

A: Yeah – music and design. Music is my passion, I run a record label (Smokey Crow Records), I DJ, I produce and I love it. I think of myself as constantly learning and trying to achieve that sound. I think design is my other passion – most of the bass music posters in the city are my design and I do a lot of branding for some of the DJ’s and music producers out here. When I’m not writing music, that’s what I like to do. 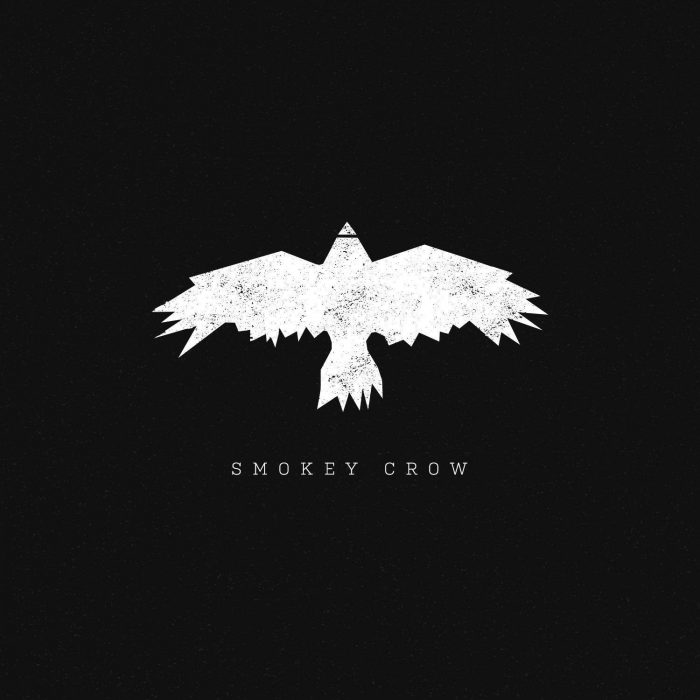 Q: Besides Smokey Crow, which is your label and what set up our meeting today, who would you say are the other key figures in bass music culture here in Vancouver?

A: Right off the bat the crew that I’m in: the ShahDJ’s. They’ve been cutting it in Vancouver for about 10 years… 11 years, as of this past weekend actually. They started out doing mostly Drum and Bass but over the years have started to distribute a more and more diverse selection of music and it’s a trustworthy brand. The TURU Crew is another – they throw shows with the SHAHdjs a lot and have a great taste in music.

Q: In regards to the city, how would you say Vancouver’s spaces facilitate the music culture here?

A: You mean like the actual city itself and the government?

A: We have a hard time in this city. Venues are a constant issue, we’re being kicked out of them constantly and rent is a huge problem. Trying to find a good music venue is one of the big challenges here, we seem to constantly be fighting for them and there have been some great ones over the years. I love the underground spots; you know the warehouses and the half-illegal if not fully illegal spaces.

A: Places like: Submerged, The Woods, The Dollhouse – these were places back in the day that were the cultural centers of Bass Music in Vancouver. ‘Red Gate’ was one I spoke to you about earlier, that space has changed locations a few times. It started out in this basement on Hastings and the first time I went there I thought I was gonna be eaten by vampires.

A: [Laughs] Well I thought it was like Blade. I was really young, early 20’s or something and it turned out to be fantastic. This city needs to do a better job with venues because I think the government in general doesn’t provide enough incentives for venues to exist. They don’t support the culture here despite wanting it to be an international city – it can’t be a city of condos you know? It has to have cultural hot spots and that happens from the ground up.

Q: [Nods] we’re seeing this a lot in the UK as well. Restrictions on venues are getting ever-tighter and spaces to congregate, particularly at night, are at a premium.

A: Fabric closing down was an internationally recognized event. It’s a shame that isolated incidents can go so far as to close a place down. Anywhere you look there are bound to be problems, particularly when drinking etc. is involved; to then shut a venue down for these issues, even if they’ve done all they can to safeguard against them, that suggests to me an ulterior motive. That can’t possibly be the reason, it’s the excuse.

Q: We could talk about that for days mate, but I absolutely agree man. Just to keep things moving are there any BC-based releases that you would spotlight?

A: I wouldn’t plug my stuff specifically but I’ve been in love with everything we’ve been putting out on Smokey Crow – essentially there was a time when I was doing a bunch of different sounds and was trying to find my footing in what I wanted to do and I would say around the 9th release is when I decided ‘this is what I wanna do’. We’re Canada-wide, so our next one is from a guy called ‘Substance’ out of Montreal and it’s called ‘Book of the Dead’. This guy is amazing, he makes deep dubstep and the layers are just so good. Our release before that was from ‘L Nix’ out of Nelson, BC and he’s prolific. Also my boys Greazus are phenomenal – they’re just fun dudes who don’t take things too seriously but take music very seriously.

Q: Quite the list! Are there any big shows coming up?

A: He’s coming to town on Friday 19th as part of a SHAHdjs/TURU Crew party – I’m really looking forward to that one. At the end of the month on October 26th we’ve got Madam X and Biome which is right up my alley. Madam X crushed it this year and Biome is a legend, expect some dungeon-shit. 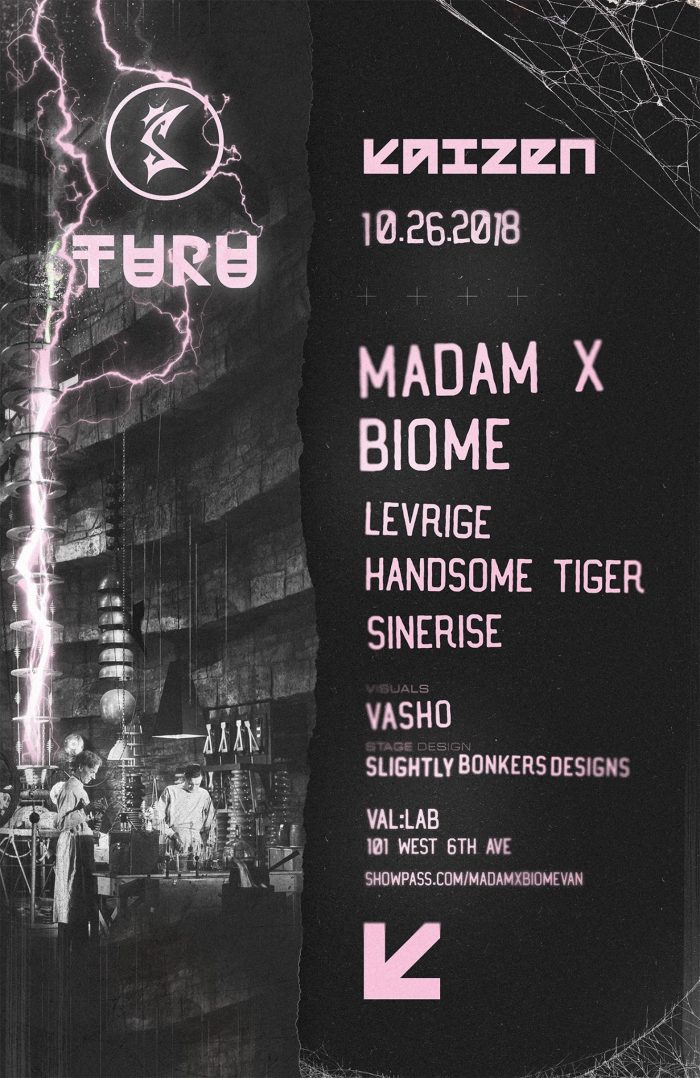 Q: Do you think there’s a place for genres like Grime/UK Bass/Bassline in this city?

A: Oh absolutely, we are so ready. My sets tend to be a blend of Dubstep and Grime, I just love the attitude that Grime brings and it always gets the crowd hyped. Patrik from Greazus is one of the biggest Grime aficionados that I know and he’s one of the people who really got me into it back in the day – he was D Double E’s DJ at Shambhala, so Grime for sure has a place here… UK Bass/Bassline? Definitely. I’ve been pushing that dark 130 sound for the past 3 years or so and all things 140 are welcome here. Vancouver’s like the UK’s cousin or something I dunno – we are so influenced by the UK sound and it definitely has its fingerprint over here. 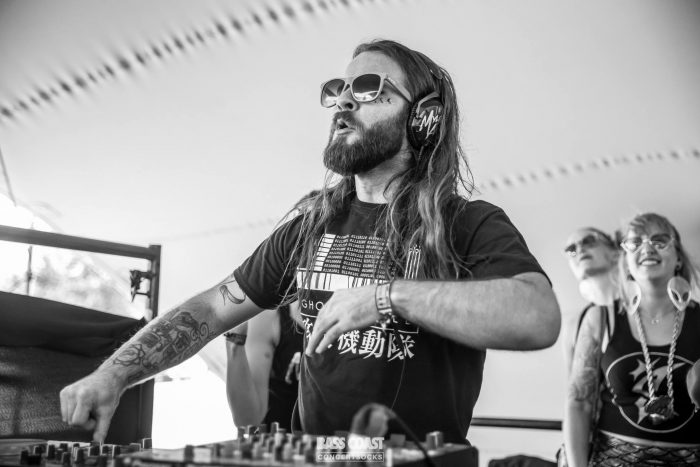 Q: Here’s a more personal one for you: what’s your favourite bass tune or record? I’m aware it can be quite hard to narrow down.

A: My favourite bass tune? Oh man that’s tough. I would probably say it’s that Commodo/Gantz/Kahn release ‘Volume One’. It’s one of the most perfect blends of artistry that the genre has seen – I love the musicality of it, I love the production quality of it and those melodic minor sorts of sounds were nailed.

Q: We were talking about it earlier and I’m glad you mentioned it! It’s such a good EP man; I’ve listened to it so many times. Unfortunately we are approaching the end of the interview – just to get your take on it, are there any words for people in the scene right now?

A: For the up-and-comers: do you! Don’t chase a sound just because it’s a trend, just find what you like and really go for it. Also make sure you go to shows and get your face out there as that’s what it’s really about… When you treat the scene right, it’ll treat you right.

Q: And as one final question: what do you think the future holds for Bass Music in Vancouver?

A: I like the underground vibe and that’s where I hope it stays. I just want more venues in the city so I hope that’s what the future holds, hopefully those venues will be free of hassle from the government too and don’t cost too much. I hope we can just let the music flourish here.

Q: Thank you Myles, you’ve been very insightful and thank you for meeting me for sushi.

Another huge thank you to Myles for giving us at 3000 Blog the opportunity to interview him; you can check out the latest two releases on Smokey Crow below: