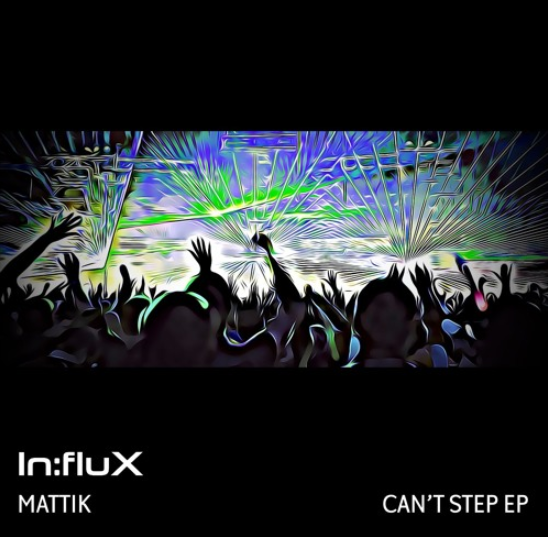 Bassline seems to conjure up a wide range of creative adjectives. This can be attributed to people attempting to describe the vast library of sounds created within the genre. In my relatively short time on earth I’ve heard a veritable range of descriptors: ‘Harrowing’, ‘custardy’ and ‘stinky’ are amongst my favourites but I wouldn’t be alone in reporting I’ve even heard tracks referred to as ‘evil’ before. Mattik’s latest EP release on In:flux ‘Can’t Step’ is a cut that demands a creative description, so I will do my best below.

The EP opens with its titular track ‘Can’t Step’ and from the beginning an octaved sub underpins a textbook 4×4 drum pattern. Beats 2+4 pick up a metallic-sounding piano and forms a sort of hybrid groove that comes out something like a dub track over bassline drums. This accompanies a sampled speech, part of which forms the title of the track and EP. With the words ‘Can’t Step’ reverberating an ominous, filtered motif swells into the track and the fun begins.

The core and constituent part of this piece is frenetic and uncompromising; as unfriendly-sounding as it comes, it reeks of sweaty bodies and feels like being shoulder-barged by someone overly gassed (we’ve all been there). The initial, more ‘relaxed’ idea provides some slight respite from the unrelenting pace at which all Mattik’s ideas, crammed tightly into four minutes, nineteen seconds of music, race on by. With several, distinct drops ‘Can’t Step’ is a useful weapon for a DJ to have in her/his repertoire; each idea slaps as hard as the last and any of them could easily comprise a standalone track.

The B side of this EP is a VIP of a tune that’s been sitting in my Soundcloud likes for some time. ‘Dead!’ was one of my favourite bass tunes in recent memory and it is a pleasant and welcome surprise to hear that the VIP may even be a slight improvement (I said it!) on an already ludicrous track. ‘Dead! (VIP)’, like its predecessor wastes no time in throwing its weight around and by 27 seconds a grotty, jackhammer-like beat throws everything off-kilter. Passages like those on display at (0:55) and (1:48) give off the feeling that the beat is barely being contained by your speaker and the riffs throughout are nicely varied without straying too far from the tried-and-true bassline formula. This VIP of ‘Dead’ is simply put, a stinker and for me is the highlight of this record.

There are also three remixes of the title track on this record worth checking out; each brings a unique slant to the ideas presented in the original tune. However, for brevity’s sake I have opted just to focus on the two original tracks produced by Mattik. A link to the EP (including these remixes) will be provided at the end.
‘Can’t Step’ at its brightest points is a sledgehammer of a record and both tracks could and should find their way into any self-respecting Bass DJ’s library. In particular the VIP of ‘Dead!’ is an impressively potent effort and has already had me going in at my desk.