Bassline as a genre is nowhere near as young as a lot of the newer additions to the fanbase would believe. There were many years or northern dominance within the vibrant expanse of the Bassline scene before it ever ventured anywhere near the south. This was the era of compilations and mix-packs such as ‘Birmingham Bassline’, a major contributor to my younger musical influences, to the point where I would be pushing these tapes upon my friends at every available opportunity.

One of the names who was very well established during these earlier times was Wittyboy, who’s furious synth design and high energy arrangements were notorious for tearing clubs around the north to pieces. During Bassline’s more recent resurgence and especially in the niche-sector of the genre, Wittyboy has become a major player again, performing at venues up and down the country whilst releasing some sizzling new original creations.

His brand new ‘Narcos’ EP is a perfect example of this, as he not only compiles a top draw three track selection, but launches his own label imprint to go with it entitled ‘Wittyboy Music’. The EP itself is made up of some cracking compositions, starting off with the explosive title track ‘Narcos’. This one hits a modern bass fan right in the “I Want That” sensor, with strings of lively synths running riot amidst powerful drum creations and skippy rhythms. 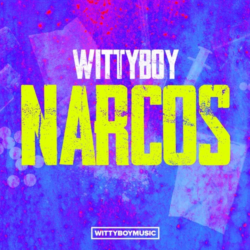 Next up, recent Nightbass addition and all around man of the minute: NuBass joins the party for a heavyweight collaboration on ‘Bumba’. This one is perfect for smashing the rave the smithereens with high end bass tones hitting the mix in machine gun fashion, doused in bit crushers and other wicked touch ups. The third track works wonders as a closer, transferring the energy of the collaboration into another dance floor sheller by the name of ‘Shimmy Ya’. This one works more high end synth magic into the blend with another helping of well polished drum support, putting the metaphorical cherry on the cake.

We really enjoyed getting into this one, so much so that we had to grab a few words with the man himself, which you can check out  below:

Firstly, how long is it now since you first got involved with the Bassline scene?

I was involved in the Bassline scene from the start really when it was taking on the name Bassline. Prior to that it was known simply as Niche music after the legendary Sheffield club. Myself and a handful of other producers began making 140 bpm style tracks with darker bass which was much more heavier than the original music played in Niche.

Over the years what has been your favourite city to play?

This is a tough one as every city has its own unique selling points but if I had to choose one then it would probably have to be Sheffield, simply because of its long lasting relationship with the genre and so many memories there.

How would you describe the landscape of bass music in the UK currently?

I would say it’s a bustling metropolis that is full of talent, however it is becoming saturated with people all trying to follow the same blue print.

As a veteran, do you feel often that you are charged with gatekeeping the new generation?

Not at all! I hate the idea of certain individuals or groups dictating who can or can’t make moves in the scene no matter how big their history. Some of the scenes most established names are from the newer generation and I respect their hustle the same as any veteran.

So this Narcos EP is the first drop on your own imprint. What is the reasoning behind starting up a brand new project?

I have been toying with the idea for a while now. I’m a very hands on guy when it comes to my branding and marketing myself, so I figured who do I trust more than myself to represent me in the best way?

How long has the EP been in the works?

The EP kind of grew organically over the course of a few months of experimenting in the studio. I wanted to find three songs that felt right together as a package.

The collaboration with NuBass is a heater, have you guys been working together for a while?

We connected through social media and began swapping tunes for gigs. We had a mutual respect for each others production style and within a month or two of speaking we smashed out the collab. It was pretty seamless.

Do you feel this summarises your sound at the moment?

Those that know me well will say that I am very diverse producer. I can make Garage, Bassline, House, you name it! My style and sound is constantly evolving all the time so this EP is just one of the many avenues of my sound.

Do you have future release plans for the label in the works already?

Nothing set in stone yet. I’m just taking it release by release at the moment but the intention is to keep a momentum and also release for other artists.

Are you still looking to release music with other imprints?

Yes absolutely! The Wittyboy Music imprint is just something that I wanted to introduce to give myself a self sufficient avenue where I’m in control.

What other artists are you wanting to collaborate with at the moment?

There’s so many talented artists in the scene. I’ve already verbally agreed some collabs with some big names in the scene for 2019, but I don’t want to give anything away just yet!

My plan for 2019 is to really showcase my musical ability with a range of releases. I would love to do an album but the timing has to be right!
–

You can grab the full project: HERE